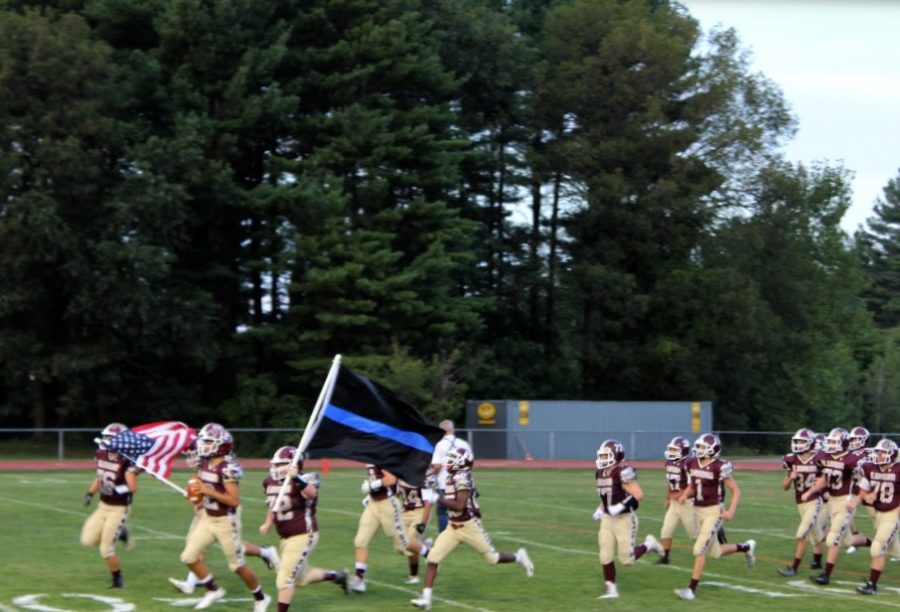 The team storms the field to kick off their home opener against Worcester North on September 7. The T-Hawks won 32-0.

The T-Hawks shutout the Worcester North Polar Bears, 32-0 during their regular season opener on Friday, September 7.

During the 3rd quarter the Tomahawks led the Polar Bears 24-0. It was 2nd down, and the Tomahawks were in the red zone, 20 yards away from a touchdown, and 1 yard from a first down.  Starting QB senior Brendan Hermanspan handed it off to senior running back Will Johnston. Johnston broke a couple tackles, sped by the defense into the end zone and scored the final touchdown of the game.

Algonquin went for a two point conversion after every touchdown, and their aggressive offense paid off.  Worcester North’s defense was challenged from the start as Algonquin’s running backs led the way for the T-Hawks.

As a team, Algonquin combined for 208 rushing yards and averaged 6.93 yards per carry. Johnston went on to lead the team in rushing with nine carries for 72 yards. Two of those carries went for touchdowns.  Sophomore Rio Ferguson, junior Thiago Filadelfo and senior Jack Branson were also major contributors in the run game.

“Our offensive line did an outstanding job, all night long,” head coach Taylor Allen said.  “When you look at the running backs that played for us…Rio Ferguson did a great job, and then Branson ran it in for the second score, and then Will Johnston doing it twice…It was fun to see them play.”

“We definitely stepped it up, we had help from our defensive line, putting pressure on the quarterback, but we definitely did good … it was a big booster for our team,” Crain said.

“I think we played great, we had two interceptions, forced a fumble, I think the d-line did pretty great,” Santana said.  “Good energy, physicality, that was a big thing for us coming into this game, and I think we just executed like we planned.”

The T-Hawks have some tough matchups upcoming.  Their next game is on the road against Marlborough on September 14.  Expect the team to work hard this week to deliver another strong performance.