Back to School: what you need to know

With an exciting and busy school year ahead, principal Dr. Sara Pragluski Walsh has plenty of updates about school policy and events. 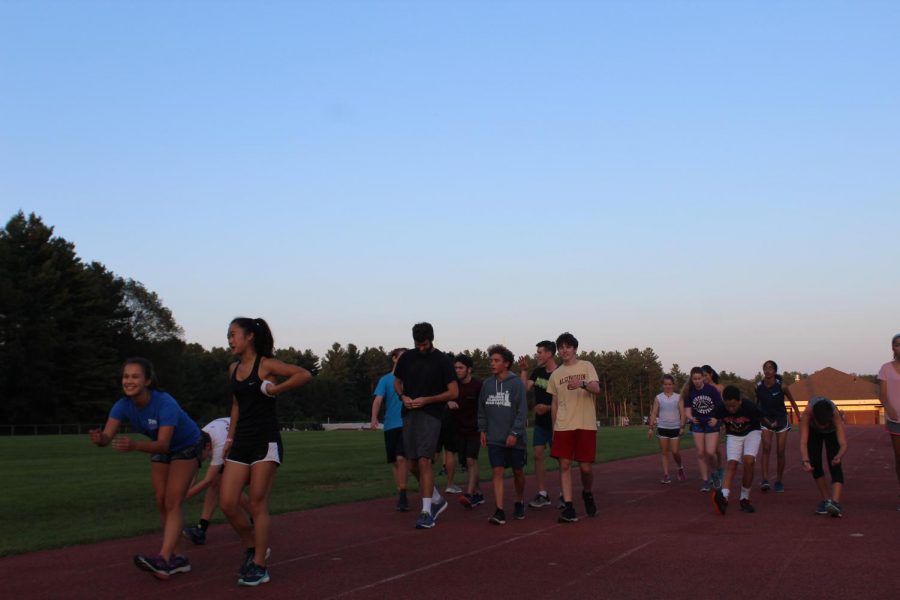 Students on the cross country team warm up and stretch.

The assistant principals will be starting a new administrative technique called looping this year in order to build positive connections and maintain relationships with students, according to Walsh.

“Looping is when an administrator or teacher goes with their students,” Walsh said. “So [assistant principal Michele] Tontodonato had the twelfth graders last year, so this year she moves back down and has the freshman. She’ll have four years with them.”

Looping will help administrators get to know their students better, and it also helps students become acquainted with their assistant principal early in their school career.

“If you had Mr. McGowan as a principal last year as a junior, you know what to expect,” Walsh said. “You’re not going to have all these crazy surprises. You know where to find him, you know where he stands during lunches, all those little things that are important.”

Until this year, any grade below a 65 was failing.

While this system will be used for everyone’s report cards, this grading scale will affect GPA calculation only for the class of 2022.  Other classes will continue with the previous GPA calculations.

See pages 22-23 of the Student Handbook located on the Algonquin website for more information.

The class of 2019 will be the first class not to receive rank, according to Walsh.

In previous years, students would receive a number informing them of where they stood in relation to their peers.  However, class rank has been abolished by administration in an effort to encourage a holistic transcript reading by colleges.

“Colleges do way more than look at a number,” Walsh said.  “They realize that a child is more than what we would say, rank, or GPA.  They have learned to read transcripts, understand what courses mean, understand the diversity in courses, the level in courses that a student has taken.”

According to Walsh, not having rank forces colleges to learn more about its applicants, ultimately benefiting the students.

“Now colleges have to know our Algonquin children,” Walsh said.  “They have to know what it means to earn a T-Hawk diploma.”

Starting this year, only faculty members can park in the library and rotunda parking lots in order to make parking easier and create more student parking spaces, according to Walsh.

“We were able to expand the number of parking permits to include some of our sophomore students based on when they age up,” Walsh said.

In the past, only juniors and seniors could buy parking permits

“So now, faculty will park in the rotunda lot and the library lot and leave the rest of the spaces for the students,” Walsh said. “So students won’t be driving around rows to try to find a spot when they come or go. They know ‘there is a spot in this lot, I can find it,’ based on the numbers.”

Walsh is happy with teacher cooperation in implementing this change.

“I know that it’s difficult for the faculty to move the parking to just one or two lots, and I am so appreciative that they are so supportive in putting students’ needs first,” Walsh said.

The history department will be unrolling their reformed US History curriculum for the freshman class.  This new course will be unleveled and will aim to promote skill development.

“What the teachers have done is create a diverse, inclusive environment where all children can shine,” Walsh said.  “It takes a lot of work to meet 24 students’ individual needs in a classroom, and they’ve been working all summer – on their own time – and all of last year, and they’re ready to go this year.”

History teachers have been collaborating through the creation of a professional learning community, which has allowed them to meet at the same time every day. Through their work together, they have come up with unique plans for each unit to put critical thinking skills into practice, according to history teacher Brian Kellett.

All students will take the course at the College Prep level.

“Students will earn grades depending on their level of mastery, but it’s beyond that,” Walsh said. “They will have some great different forms of learning, and we’re really excited to pave the way.”

The freshman orientation dance’s date was pushed back and time was pushed up in an attempt to give more students the opportunity to attend, according to Walsh.

“In past years it was the week or two weeks before school started, but a lot of our parents and students would miss it because they were on vacation,” Walsh said.

The dance and the parents’ meeting will be at the same time later that night from 5:00 pm to 7:00 pm.

“We’re doing it a little earlier this year to kind of have it overlap with the parents meeting,” Walsh said.

Walsh feels that these changes will lead to an increased attendance to the orientation, dance, and parents’ meetings.

“It takes a really strong tradition that we had at Algonquin already and makes it a little better,” Walsh said.

Faculty will place greater emphasis on modeling positive connections in order to decrease student engagement with risky behavior this year, according to Walsh.

“Everyone knows that a child’s risky behaviors decrease dramatically if they have a positive relationship with a school employee,” Walsh said. “So it could be a teacher, it could be an aid, could be a custodial worker, cafeteria worker, administrative assistant, coach, doesn’t matter. But when you have a child that has a positive relationship with an adult here in the school, they don’t turn to risky behaviors like sexual activities, drinking, drugs, vaping, things like that. They choose more positive behaviors.”

The administration has put a connections committee in place in order to try to build these positive connections.

“It’s made up of teachers, guidance counselors, faculty members, and they’re building professional development so that faculty learn how to build positive connections between adults that can then trickle down to positive connections with students,” Walsh said. “If you’re in the math wing, do you ever get down to the fine arts? Probably not! But the kids do, so we should be able to build those same connections.”

The goal is to make Algonquin a better, safer place.

“We really want to build positive relationships with our students,” Walsh said. “We love Algonquin.”

Students should be aware of and keep tabs on their iPass and Canvas accounts, according to Walsh.

iPass is the program the school uses to communicate report cards, scheduling and attendance.  The information in iPass also provides administration with contact information to alert in the event of a snow day or any other concern.

Canvas is a program that teachers often use to assign work and announce grades.

Bring Your Own Device Program

Administration is ironing out the details and logistics of the Bring Your Own Device Program, which will require students to bring a device from home to boost productivity within the classroom.

“We’re really excited about [the program],” Walsh said.  “We don’t have as much updates as we would like, but that’s because we want to put the infrastructure pieces in place to make sure that all children have access to devices when we fully roll out Bring Your Own Device.”

Pilot programs last year proved to be successful, and laptop carts have been used throughout the school.  According to Walsh, the administration does not know what device students will need yet, but she encourages students to bring devices they already have, with one catch.

“A cell phone is not a device!” Walsh said.  “It needs to have a keyboard.”