THE ALGONQUIN HARBINGER • May 14, 2018 • https://arhsharbinger.com/14494/news/algonquin-students-take-trip-to-france/ 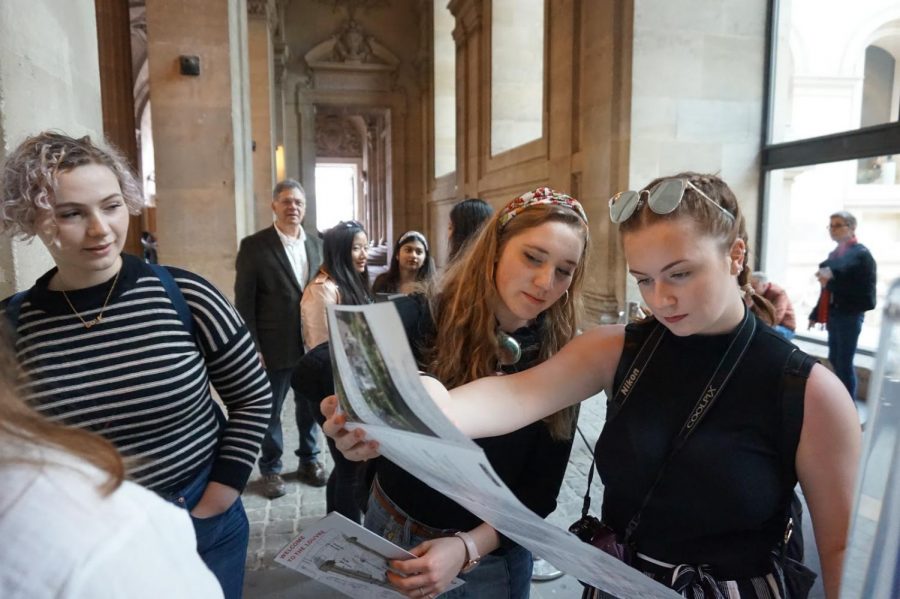 Juniors Lauren Earley and Annalise Loizeaux gaze at the map of the Louvre, one of the largest museums in the world, which is home to Leonardo da Vinci’s Mona Lisa.

From the bright lights of Paris to the classrooms of St. Etienne, French students were able to explore both the tourist hotspots and the life of a typical French student.

26 students went to Mont Blanc, Paris, and Lyon from April 14 to April 24 to learn about a new culture and improve their French.

In addition to the scenic views from Mont Blanc, the highest peak in the Alps, and the shopping they get to do in the cities, students were able to experience a new culture. Although the trip cost almost 3,000 dollars, junior Rianna Mukherjee feels it was worth it because of how much they were able to learn.

“We got to learn what it’s like to live in a small city in French, what their daily life is, and how it differs from ours,” Mukherjee said.

Sophomore Meredith Lapidas agrees that it was a much more enriching trip than a normal vacation would be.

“I think going with your family, you wouldn’t have gotten the same experiences as meeting up with a host student,” Lapidas said. “They bring you to a lot of secret restaurants that you might not know about.”

The trip is organized by Lauren Osepchuk, who encourages more students to go on the trip in the future.

“They don’t understand how much they’re gonna get out of it… For those that are risk takers, those who aren’t going to rely on the good English of the French kids, they benefit a lot,” Osepchuk said. “Culturally, they learn as well, who they are as Americans, which is really valuable to understanding their own identity and seeing how Europeans see the world and live a little differently.”

Everyone had their own reason for going on the trip.

“Personally, I’m really into European culture, and I’ve never been to Europe myself, but I was very interested in seeing if I could use my own French skills,” Lapidas said.

“For me as a French teacher, [the best part is] seeing my students speaking French and becoming more relaxed in using the language they know,” Osepchuk said.

“I had the experience of hosting a student too, so it was amazing having her come and experience my life and then for me to go over there and experience her life and meet her family,” Mukherjee said. “I hope to go back and visit her because she’s awesome and I love her family.”

Osepchuk, Mukherjee, and Lapidas all urge students to consider hosting an exchange student as well as going to France to encounter new cultures and places.