THE ALGONQUIN HARBINGER • May 10, 2018 • https://arhsharbinger.com/14469/showcase/girls-softball-looses-against-hudson-but-plays-strong-defense/ 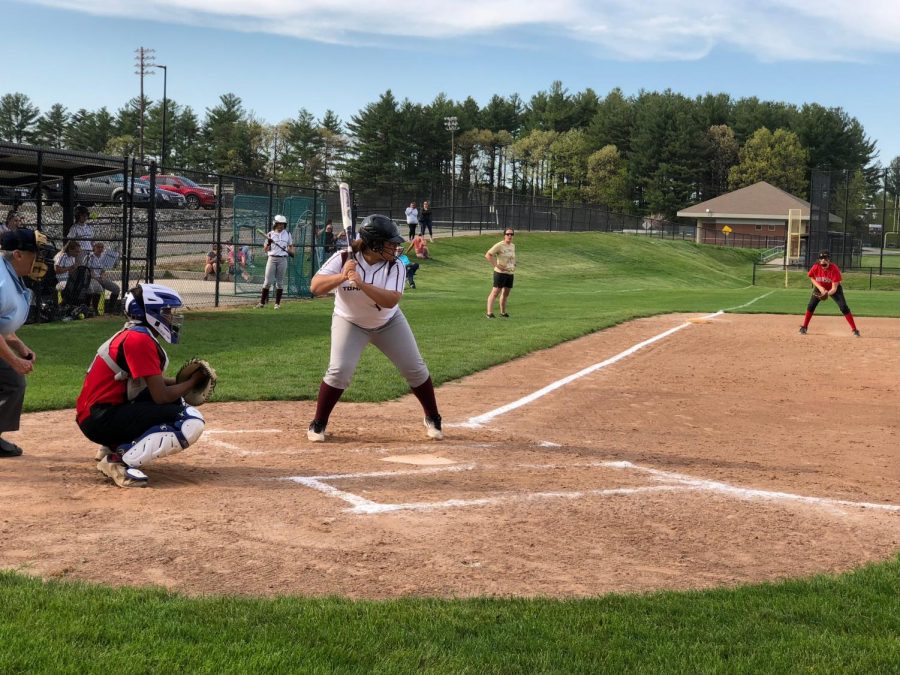 Sophomore Victoria Smallwood prepares to hit the ball at home base.

Maggie Del Re and Sean Neusch

Girls’ softball played a tough game against Hudson on Wednesday, May 9, losing with a final score of 9-1.

Still, the team left the field satisfied with their persistence and strong defensive performance.

“Overall, it was a lot better than a lot of our games, I would say,” junior captain Mia McAuliffe said. “We played really well defensively.”

“The fact that they have blown out other teams that are a lot better than us and that we battled them through this entire game is pretty promising,” McAuliffe said.

The team really proved their capabilities during the sixth inning.

Defensively, the girls did not let Hudson score a single run. The first Hudson player up to bat became Algonquin’s first out when freshman Sabrina Greenwood caught a fly ball from outfield.

The next hit bounced towards McAuliffe, who picked up the ground ball and fired it to sophomore Sydney Cerro at first base, earning the team’s second out.

The third hit was picked up by junior Rachel McMenemy who then passed it to Cerro, earning Algonquin the offensive position by scoring a third out.

“It was nice,” Pageau said. “It was our only run, so I wish we got more obviously, but it was good.”

Despite losing by a large margin, the team knows that they have the capacity to play well, and will continue to work hard moving forward.

“We played hard the whole game, we just made some errors here and there, which doesn’t reflect how we are as a team,” Pageau said. “It could have been a much closer game, just based on runs, but I think we played really good.”

“That was definitely one of our better games defensively; it’s just that offensively we need to find a way on base and just rack up some more runs,” McAuliffe said. “In practice we are definitely going to take a more offensive approach I think.”