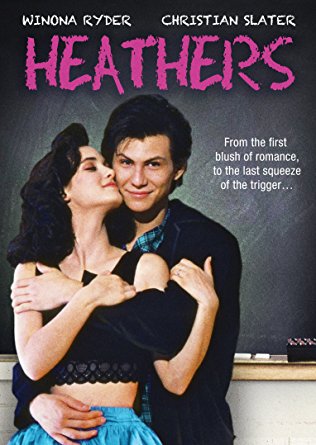 A group of popular, mean girls. A basket case guy who sweeps one of the popular girls off her feet. Dumb football jocks trying to get girls. Based on these characters, “Heathers” may seem like your typical high school movie. Think again.

As soon as you think you have this cult classic figured out, everything shifts. What you thought would be a relatable teen movie shifts to embody disturbing, dark comedy.

In director Michael Lehmann’s 1988 film, average teen Veronica Sawyer (Winona Ryder) has everything she should want: three popular friends (all named Heather), football players pining after her and a killer wardrobe. Then she meets Jason Dean (Christian Slater), an angsty bad boy turned sociopath who thinks her friends are cruel. The two begin dating, and J.D.’s teenage angst begins to get the best of both of them. They go on a murder joyride, killing the popular people for the good of the school, and staging the deaths as suicides.  Suicide becomes trendy in the school, and the actual depressed teens are mocked for “trying to act like the cool kids.”

If you take the movie in its most literal sense, it is appalling. Instead, a viewer should look at it as pure satire, mocking the society that we live in. It magnifies real issues, such as depression, homophobia, bullying and social hierarchies. The snobby girls named Heather, dressed in elegant blazers and collared shirts, all play croquet in the backyards of their glamorous mansions for fun, highlighting their wealth and class. Even the fact that all three are named Heather is laced with satire; they are all the same archetypal mean girl you have seen in every single high school film. Ever.

J.D. is the “socially repressed” bad boy on steroids, the John Bender that takes it too far. Instead of simply pulling Veronica away from the in-crowd, the writers chose to amplify his frustration by fuelling him with so much hatred that he is lethal. His influence over Veronica enables him to convert her to his same mindset temporarily.

Though dark, this doesn’t mean the movie isn’t laugh-out-loud funny. The students’ and teachers’ reactions to each romanticized suicide as well as the witty one-liners woven in throughout make this a film sure to crack you up.

“Heathers” is anything but a traditional high school movie, and that’s okay. The social mockery it conveys is refreshing, especially in our current society. Stream “Heathers” on Netflix at your next night in for some heavy but surprisingly lovable dark comedy.