EDITORIAL: We the people must defend the great tradition of immigration 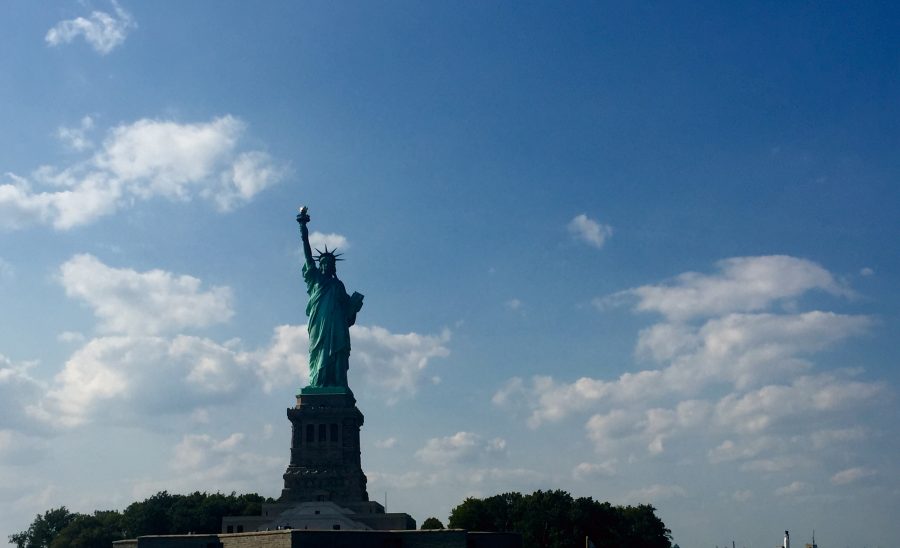 Ellis Island, where the Statue of Liberty holds her torch up to the sky, was often the first American soil immigrants touched after their journey.

In New York Harbor there stands an emerald emblem casting a promise across the rolling water which laps the shores of Ellis Island. This pinnacle of the American Dream offers the welcoming words of “Give me your tired, your poor, your huddled masses yearning to breathe free.”

Emma Lazarus’s sonnet “New Colossus” manifested the American dream for thousands of souls who have crossed into the United States, seeking refuge from economic strife, religious persecution, political corruption, and the terror of finding their homes no longer safe.

We offer ourselves as a country comprised of a vibrant and colorful mosaic of cultures and customs and languages, where your country of origin positively contributes to the melting pot that is America. Here, you encompass American ideals no matter your characteristics. Here, you are an American.

In keeping with this principle of diversity, the Framing Fathers crafted the First Amendment to guard the very liberties this nation was founded on, with a clause specifying freedom of religion.

Just as the United States does not have an official national language, we also do not have a national religion, for our Constitution was built on the premise of separation of church and state.
American cities bustle with congregations of Baptists and Catholics and Hindus and Jews, and every Sunday, millions of people gather at their respective religious centers and pray to their God.

This has long been a nation of immigrants of every creed who have contributed to the collective culture of America, disseminating their ideas to cultivate a society founded on acceptance and harmony. What we are witnessing now rejects these ideals. To bar individuals from predominantly Muslim countries with the flick of a pen contradicts American principles.

With his executive order, President Trump suspended all refugee admissions for 120 days and banned citizens of seven Muslim-majority countries, refugees or otherwise, from entering the United States for 90 days: Iran, Iraq, Libya, Somalia, Sudan, Syria, and Yemen. The White House has fostered a trepidation of people who do not “look” American or who subscribe to a non-Christian entity; the President has effectively written an executive order deeming hijabs synonymous with terrorism.

We must demand personal reflection, to ask ourselves if we accept or dissent. America is an enthralling idea, a notion of liberty and individualism where any brave soul has the ability to pull themselves up by their bootstraps and ascend beyond their original means. It is an idea of opportunity, of empathy, of compassion, of daring to be what everyone else thought was impossible: the Free World.

As a nation of the people, for the people, and by the people, we must defend these ideological pillars, even if the White House challenges them. For we are better than any one branch of government, than any one administration, and any one man.

Protest, petition, call your representatives, and facilitate effective dialogue, whether you support or oppose government actions. Let the world know what America is to you.

The unsigned editorial reflects the views of The Editorial Board.