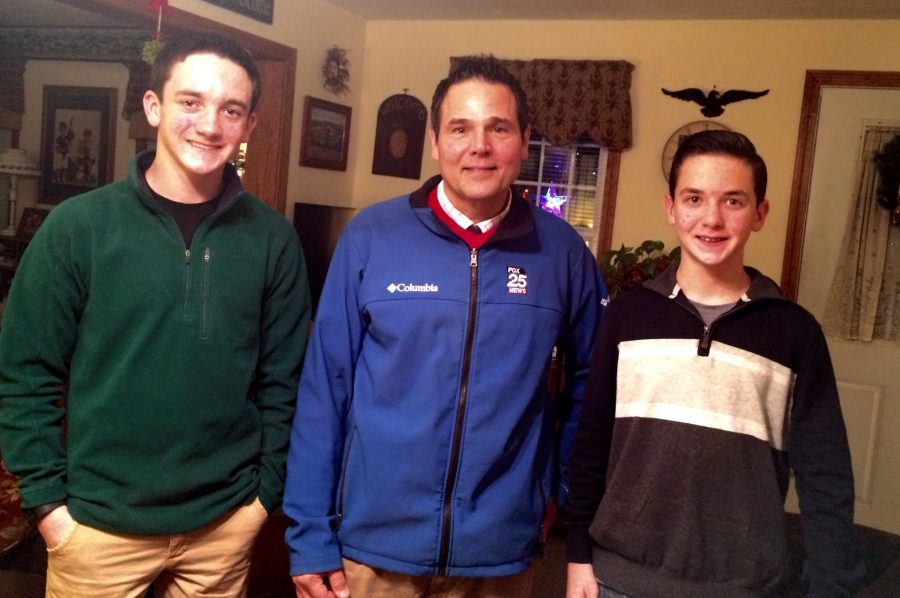 Fox 25 reporter Jim Morelli worked to promote Senate bill No. 2449 along with Ben and Jonathan Godbout.

Thanks to the work of social studies teacher Stephen Godbout, all public and charter schools in the commonwealth of Massachusetts will be required to have an automated external defibrillator on site by July 2018.

An automated external defibrillator, or an AED, is a device that can diagnose life-threatening cardiac diseases and treat them through electrotherapy. The origins of this new AED requirement can be traced back to Godbout, who worked tirelessly alongside local families for nearly two years to pass Senate bill No. 2449. They went through many obstacles to win over the Massachusetts State Senate and House of Representatives and turn the bill into law. The bill made its way multiple times around the state government before being passed unanimously by the Senate during the last few hours of the legislative session. Godbout credits the media for shedding positive light on the bill and for preventing the delay of its passage.

One individual in particular who helped to promote §2449 was Fox 25 reporter Jim Morelli. His past experiences with heart-health related issues drew him to Godbout’s cause to prevent lives from being lost due to heart conditions.

“Back in April 2016, with the help of the Massachusetts Teacher’s Association, we [teachers] put together a press release talking about the good work we were doing at Algonquin,” Godbout said. “Jim Morelli saw the press release and sent it out to all media outlets. Because of his background and personal interest, he quickly picked up on the story and reached out to me immediately.”

After having an experience with cardiac arrest just two and a half years ago, Morelli recognized the importance of AED accessibility.

“I understood their cause,” Morelli said. “I coach soccer in Holliston and there are no AEDs on the soccer fields. After my experience with ventricular arrhythmia, I became acutely aware of the dangers of heart conditions.”

Godbout recognized the role of the media in preventing §2449 from being delayed until the next legislative session.

“By July, [the bill] had passed through the House, then it stalled in the Ways and Means Committee,” Godbout said. “I was pretty convinced that the bill was just going to flounder in the Ways and Means Committee unless we could shine a light on it and get people interested. If the bill failed in the House, it would have to wait until 2020 to get passed.”

Instead of staying put, Godbout reached out to Morelli, who then published an article on the Ellsessar family. The Ellsessars had lost two of their sons to cardiac arrest and was one of the families that Godbout had worked with to pass the bill. Morelli’s touching story resulted in positive feedback from the public and an overwhelming amount of people who wanted to support the bill.

“How could any legislator or any family look at [the Ellsessar’s] story and say that this bill had to be delayed? Had an AED been available on site, their son would not have died on that football field,” Godbout said.

According to Godbout, media outreach while the bill was in the Ways and Means Committee was an important turning point for §2449.

“Immediately [after Morelli’s article], we got a call from the president of the State Firefighter’s Association,” Godbout said. “Police unions got involved. People called the state house by the thousands as a result of Jim running that story. The media shined a light on the issue and showed the importance of the bill and persuaded the legislature to take action, rather than to delay the bill for the next session.”

Morelli believes the personal and emotional appeal of the Ellsessar’s story drew in a large public audience.

“It was such a powerful story of a family who lost two sons to heart conditions,” Morelli said. “When you personalize a story, it becomes more than a piece of legislation and there is a better chance of selling it to the public.”

Ultimately, the new legislation will have significant and positive impacts on Massachusetts communities and will help to raise awareness on the importance of gaining access to AEDs as well as being able to use the device appropriately.

“[The law is] going to raise awareness for the need of AEDs and the importance of accessibility to AEDs,” Morelli said. “People assume that schools have AEDs, but having an AED and not knowing how to use it is like keeping it in the back of a closet. When someone goes under cardiac arrest, they only have minutes to react. The law will increase accessibility to AEDs because it will require people who can properly use it.”

Thanks to the efforts of Godbout and other local families, schools will undergo important changes that will increase their safety.

“The bill will keep students with diagnosed or undiagnosed heart conditions safe,” Godbout said. “There are adults, parents, and grandparents who come to the school everyday. Schools are community centers and having AEDs at every school in our state will certainly save lives.”